What does the word MEME mean?

A week into 2017 and the first meme of the year was a fact. A video of the Turkish chef Nusret Gökçe surfaced where he is extravagantly slicing a perfectly cooked, tender piece of beef with an extremely sharp knife and finishing it off with a ‘pinch’ of salt, seasoning it with the most flair. Mouths were watering and his seasoning skills quickly baptized him with his new name: SaltBae. Not just because of his cooking talent, as much for his good looks. It didn’t take long for people to honor him with their own versions of his seasoning skills. Resulting in hilarious spin offs.

Nowadays Internet memes are such a part of daily lives, it is hard to imagine how we ever communicated without them.

Memes used on the Internet should not be confused with the origin of the word. According to Richard Dawkins a meme (/ˈmiːm/ MEEM), is “an idea, behavior, or style that spreads from person to person within a culture”.

Memes act as a unit for carrying cultural ideas, symbols, or practices that can be transmitted from one mind to another through writing, speech, gestures, rituals, or other imitable phenomena with a mimicked theme. Supporters of the concept regard memes as cultural analogues to genes in that they self-replicate, mutate, and respond to selective pressures. – Wikipedia

Internet memes have evolved to become their own culture with no set rules to determine when something is meme worthy. These small moments of entertainment that seem to consume the world for a brief moment in time take on different forms. It varies between photos, videos of people, animals, fictional characters, or even fragments of events or songs. Their effect is biggest when people can identify with the idea behind it.

How did they slip into our lives you ask? There is not a specific recipe on how to become a meme. There is no specific action, person or moment. It is something that deep down connects to the emotions of the masses.
It all started with a dancing baby animation. It was meant for internal use but was “leaked” and spread like wildfire. Websites like Reddit and 9GAG are two of the main sources and feed us with an endless stream of new memes.

Now where there are masses there are people seeing the profit in it. 2016 the Meme Bible was released. The adult coloring book containing the best memes of that year has been sold out and there is currently a waiting list for the sequel: Holy Meme Bible: New Testament. SaltBea opened his own restaurant; Nusr-Et owned. Here he serves guests like DiCaprio and Sheik Mohammed bin Zayed his beautiful carved steaks with an elegant sprinkle of salt

“Whom” sounds smarter and more formal than “who”. And if is whom is smart, then “whomst” has to be really smart. And forget about whomst’d and whomst’dn’tve; they’re for geniuses only. 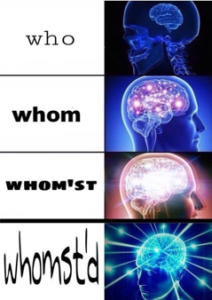 So, if you are curious what a meme can do for you and you are the person whomst’d is the smartest, please contact us, and we will tell you what is even meme’s.